The iconic story of one of the most loved artists in the world.
Biography by images with contributions, comments and statements by the great Maestro.

IL SOLE NELLA VOCE is printed in a limited edition and is presented in an exclusive customizable package.
In fact, it is possible to insert a special dedication or heading both on the precious external box and on the back cover of the volume. The book language is Italian: on the memory stick is provided the English translation of all the texts included in the volume.

Il SOLE NELLA VOCE tells about the extraordinary career of the tenor with the God-given voice and the disarming charisma, who achieved global superstardom and became a legend not only among the opera-goers.

“I want to reach as many people as possible with the message of music, of wonderful opera.”

These were the words spoken by the son of a baker from Modena who grew up to become the most famous opera singer of his age. Because of his passion for popularizing opera, he successfully broadened classic music boundaries to mass audiences across the world.

Larger than life in every way, his spectacular voice touched the hearts of so many, and his generosity knew no bounds. Along with his talent, he was also known for his charity work through his fundraising concerts to help those in need.

The book presents rare and remarkable quotes from Pavarotti about his opera roles and favourite composers; it’s filled with about 250 black-and-white and full-color pictures, as well as a dozen of removable facsimile reproductions of items, such as the 1956 script of Nessun Dorma the tenor used to study, the letter received from Frank Sinatra, the backstage pass of the Three Tenors concert and many more.

The book celebrates Pavarotti as the unmatched artist he had been: the open-minded and devoted tenor and the human, warm and enthusiastic person we all miss.

From a début on a tiny stage, to televised concerts in front of millions, Pavarotti brought opera to everyone.

In Chapter 1, The Opera, the great tenor brings us through his 29 stage roles, sharing his personal reflections on these iconic characters. Chapter 2, ‘Leaving the Choir’, tells of his unconventional desire to bring opera to the masses, performing in the world’s great arenas and parks. In so doing he became a worldwide icon, ‘Great among the greats’, as reported by the words of many important personalities in Chapter 3. This monumental artistic and philanthropic career is summarised in the comprehensive final chapter, Biography.

By purchasing this volume you will contribute to support the activity of the Luciano Pavarotti Foundation, a non-profit organization whose mission is to keep alive the human and artistic memory of Maestro Luciano Pavarotti.

The Foundation runs the Pavarotti Home Museum in Modena, organizes cultural initiatives, promotes the dissemination of the opera with events in Italy and abroad and supports young talents of opera singing.

THANK YOU for your support. 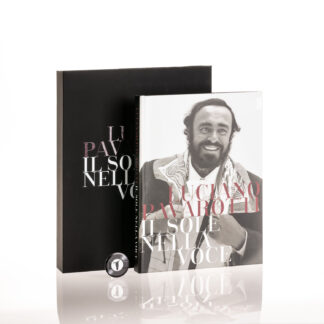